High speed mixers are in constant use in industry for dissolving a wide variety of solids in solvents. Lacquers, paints, inks, adhesives and many other products or intermediate materials are prepared by high speed agitation. In this case, the mixers consist of a powerful motor, shaft and impeller blade, mounted on a large hydraulically operated pedestal which can be raised and lowered.

In some factories when a batch is completed, the impeller of the mixer is raised from the mixing vessel and may stand exposed before it is again used. Should the drive motor be accidentally energised, body contact with the impeller could cause very serious injuries.

An adhesives manufacturer designed a safety system to prevent body contact with the impeller. First, a cowl was fitted which closely surrounded and guarded the impeller blade when the mixer was in its ‘up’ position. Then a mesh screen was attached to the cowl.

An electrical resistance detecting safety circuit, capable of cutting out the motor, was also installed. The circuit detects the level to which the mixer is raised above normal operating height. The motor will not operate if the impeller is raised too high in the mixing vessel, or if it is standing outside the vessel. 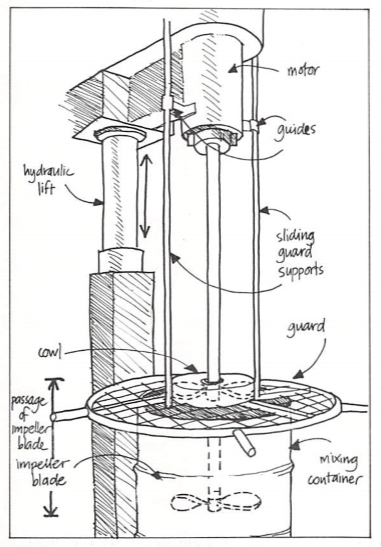