Weaving machines in the textile industries have caused many serious incidents and injuries. Accidents have occurred during the operation and maintenance of the machines, including accidental starting during tuning and adjustment work.

A high proportion of injuries were caused by entrapment between moving and stationary machine parts, particularly during the “beat-up” motion.

There has been a widespread ‘opinion’ that any comprehensive form of machine guard was impractical due to interference with necessary manual controls and adjustments.

A textile company completed an extensive program of trials and prototype designs to achieve a satisfactory loom guard. The company held consultative meetings with the union’s health and safety representatives and employees to discuss the safety problems and possible solutions.

The final guards were manufactured from steel and aluminium sections with polycarbonate covers which permit observation but do not interfere with operation.

All moveable guarding has been electrically interlocked, and the machine cannot be restarted until there is a formal reset of controls. The main polycarbonate guard is counterbalanced so that it can be raised easily.

A special “inching” circuit has been installed for use by the loom tuner so that the loom can be inched forward or reversed. Its operation follows a written safe-operating procedure (SOP).

Installation of the guards was carried out during a normal shutdown and maintenance period. 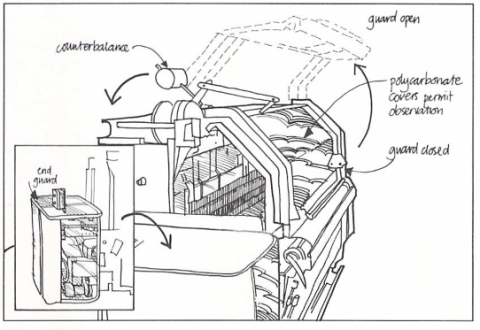