There are often airborne contaminants when cutting metal plate with plasma cutting machines. At a mine the fume being generated sometimes reached levels requiring nearby employees to stop work and vacate the workshop.

The first proposed solution to install a single extraction fan, 12 metres above the operation and supplemented by the wearing of disposable face masks was considered inadequate. Further investigation of the processes indicated high concentrations of nitric oxide and nitrogen dioxide were also being produced meaning the face masks would be ineffective. The cutting processes also produced high noise levels.

A team of employees and supervisors reviewed the work process to identify alternative methods of cutting metal plate. It was discovered that cutting metal plate close to (or under) water was a safer method with no detrimental effect on efficiency.

A decision was therefore made at the mine to install a water table. The plate to be cut is to be placed on the table’s cross beams, the plate is cut slightly above the water level.

When using the table in conjunction with a water table, gas and fume being produced is largely dissolved in the water and not released to the atmosphere. Both fume and gas levels (particularly nitric oxide and nitrogen oxides) were reduced dramatically and the generation of ozone is almost eliminated. This is due to the separation of ultraviolet light (produced during the cutting process) and oxygen (in the air) by the water. Additionally, the water acts as a medium to absorb noise generated by the process. 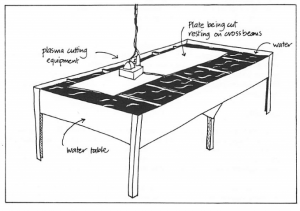