A plywood manufacturer used a guillotine to process wood veneer into strips. Two potential sources of injury were identified on the machine. The first hazard was created when the veneer was clamped onto the table prior to cutting. There was a risk of the operator’s hands being crushed under the clamp. The second source of potential injury involved the guillotine blade.

On a number of these machines the clamp is operable in an unguarded state, and is hidden from view.

A relatively simple, welded-mesh interlocked guard was fitted over the machine opening to protect the operator from injury. The guard was designed to slide vertically and can be operated manually or pneumatically.

It was essential in the design of the mechanism that the machine would not operate unless the guard was in place. This was achieved by using an interlock switch that can cut off power to the machine. Only when the guard is fully down will the switch allow the machine to operate.

An added feature was the use of two-handed control. When used by itself this is not an approved method of guarding. However, when used in conjunction with other controls this technique does provide additional safety.

The size of the mesh used in the guard was such that no part of the hand would be able to penetrate far enough through to reach a hazard. 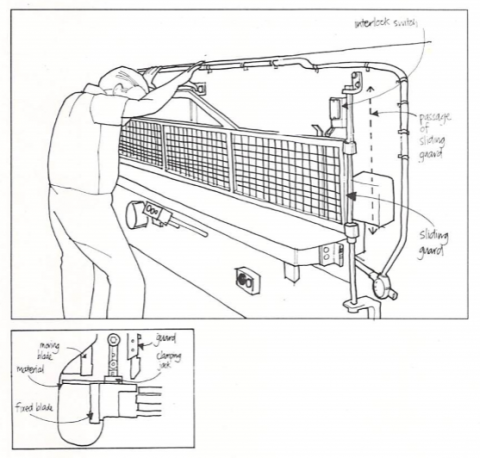