In the brewing industry, carbon dioxide (CO2) gas collection systems are used to liquefy the gas which is produced during the fermentation process. Carbon dioxide is an odourless, colourless gas with an acidic taste. A 5% concentration of carbon dioxide in the workplace atmosphere may produce shortness of breath and headaches for exposed workers. Concentrations of 10% or more may result in exposed employees becoming unconscious and eventually asphyxiated if they’re not removed to fresh air.

The engineering department were asked to prevent any health risk associated with the CO2 escaping from the safety valve on the collection line. This was achieved by fitting an exhaust system to the valve which, through ducting, was released outside the building. However, the exhausted carbon dioxide, being heavier than air, sunk and found its way into the engine room situated immediately below the fermentation process.

After assessing the problem, local management and engineering staff discussed several alternatives. It was decided to install a blower unit on the ground outside the engine room. The CO2 from the safety valve now escapes into ducting and is exhausted to above the roof line with the help of the blower. The blower starts automatically if the pressure in the collection line reaches a pre-set pressure (1.5 Kpa below the lifting value of the safety valve). The speed at which the CO2 /air mixture leaves the ducting and the natural air movements above the building readily disperses the CO2 . Since the introduction of the new exhaust system there have been no instances of excessive carbon dioxide exposure in the engine room. 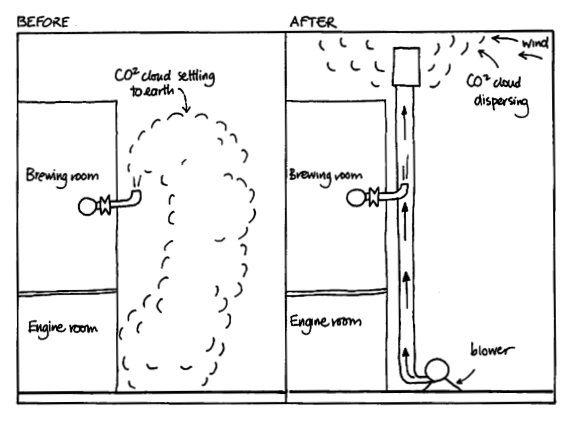