At a large chemical plant, resins were manufactured by mixing materials in a rotating conical blender. Materials for the resin are fed directly from a hopper or manually transported to the top of the blender in bags which are cut open and the contents poured in through the top of the blender. Whether pouring powdered materials form the hopper or the bags, chemical particles became airborne, potentially exposing employees to repetitive dust inhalation.

Initially disposable respirators were provided, but these were rarely used. In addition, employees were required to support the weight of the bagged material while it was being emptied into the top of the blender. This task had the potential to cause back and shoulder injuries.

Engineers were approached to design an extraction unit which would capture the dust. A hood-type extraction unit was suggested. However, after inspection, it became obvious that the design would not be simple as a hood would have to be separated from the blender to enable blender rotation for product mixing. Also, the design would have to incorporate a seal at the joint.

A capture hood and extraction system were designed and developed. Whilst powder is being poured by either method the hood extraction system draws the airborne contaminant away from the employees’ breathing zone. The hood is lowered down onto the blender opening, and an effective seal is built into the hood which prevents dust or spillage at the joint between the hood and blender. Before the blender is rotated, the hood (with the help of a handle at the rear of the hood) is lifted off the blender opening, the seal is broken, and a valve at the top of the blender is closed to prevent spillage of the product when rotation occurs. The system also incorporates a loading surface on which the bags of materials may be rested while being emptied. 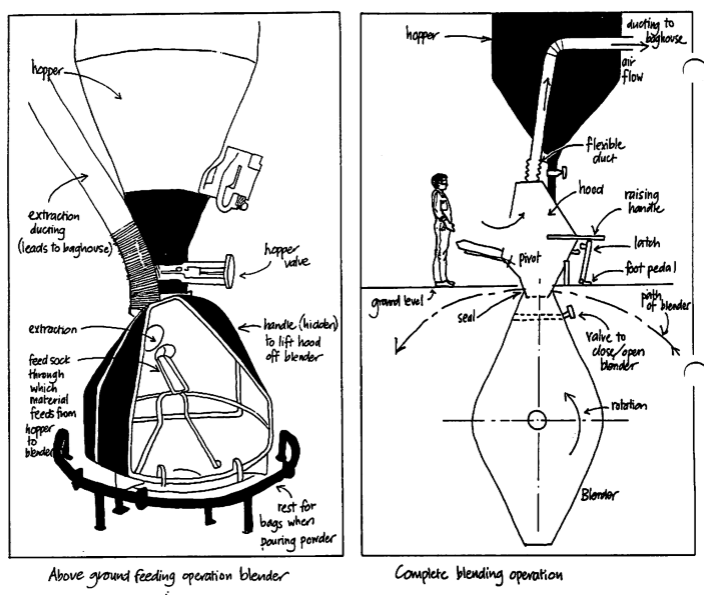