Workers at a garment factory were affected by the fumes of solvents used during the spot cleaning of soiled garments. The cleaning was carried out by spraying solvent from a hand-held gun directly onto the spot. The room’s ventilation was not designed to cope with this type of operation.

Occupational hygienists obtained spot measurements of 20-50ppm (parts per million) of solvent (containing 98% trichloroethane 1.1.1.) in the air. The accepted Time Weighted Average (TWA) maximum exposure for an eight-hour period is 125 ppm for this substance.

After consulting with employees, the company installed a local exhaust ventilation (LEV) system which was designed especially for ‘spotting’ operations. In this system air and the fume spray are drawn down through the garment and into the extractor. The same supplier was also able to provide a light weight spray gun for the process.

The LEV system has provided extraction at the source and is very quiet. Its light weight makes it easily moveable without any associated ergonomic problems. The exhaust was directly discharged to the outside atmosphere.

When the exhaust system was used for spotting with the new spray gun, 90% of the solvent and vapour was removed from the air. With the extractor operating, workplace sampling confirmed that solvent levels in the air could be controlled effectively. 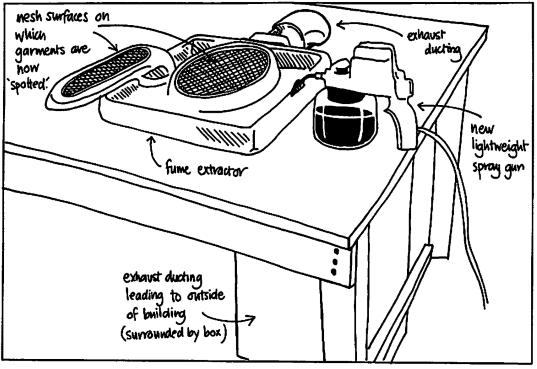