There are some machines in industry that involve a complex operation which often result in many hazards. One such machine is a dowel moulder used in the timber industry. Several hazards were identified with the use of this machine.

The nip points on the rollers were a trapping hazard. The material being worked could break, bounce back and strike the operator. Lacerations or amputations could result from contact with the cutters. Loose clothing could become entangled in the cutters or transmission and wood particles could be ejected from the machine during operation.

Whilst allowing normal operation of the machine a complex guarding system was implemented to ensure the safety of the operators. The main components of the system included a motion sensor, electrical interlocked switches controlling solenoid operated lock latches.

The ‘Guard Removal Sequence’ begins with:

Fixed guarding was included on the sides and back and a wood dust extraction system was installed to protect the health of workers. The fixed guarding included polycarbonate windows for unrestricted operator vision. 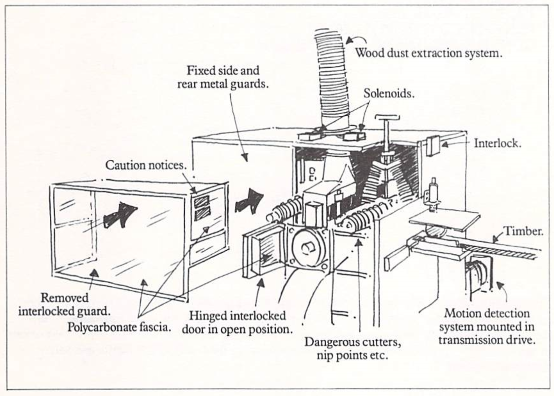