Radiofrequency radiation includes the wavelengths between 10MHz and 10kHz. This radiation is used in a range of processes such as furniture veneering, drug and food sterilization, electronic engineering, etc.

It is generally accepted that localised heating of the body tissue can occur during exposure leading to dehydration.

A furniture manufacturer uses a radiofrequency dryer to harden glue used to bind timber sections. Concern was expressed over the exposure of operators to radiofrequencies in this process. Operators were required to clamp timber onto a jig prior to engaging electrodes which generated the radiation.

An aluminium guard was constructed to enclose the process and prevent the escape of radiation.

The enclosure was interlocked such that the power to the electrodes was cut off as soon as the lid was lifted. A counterweight system was included in the design to ease the opening of the lid and prevent possible strain injuries. The guard also acted as a collection hood for glue fumes allowing for extraction of this potential health risk. 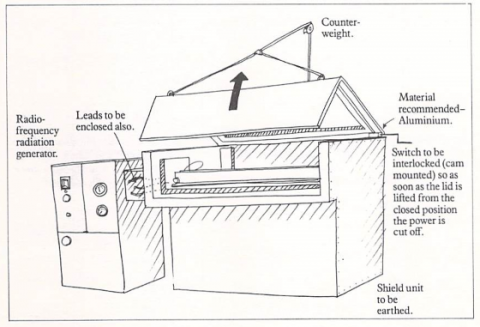