Access to the top of petrol storage tanks is occasionally needed to collect samples of the product or to conduct maintenance. On older style tanks continuous stairways to the top of the tank are provided for this activity. Newer tanks generally have landings every 18 steps or directional changes every 36 steps as per AS 1657-1985. The tanks in this instance were old style with continuous stairways. A slip or fall down these stairways could result in serious injury.

The tanks had been in service for many years and it was not considered practicable to completely rebuild the stairways. This was partly because of the cost involved and the tank’s petroleum contents, it was unsafe to weld new stairways to the tanks.

The solution to the problem has been to install steel, mesh-covered gates (see illustration). These gates (measuring 130 cm x 60 cm) are self-closing and only open to the upward side of the stairway. No catches or locks are incorporated in the gates – only a closing stop on each gate.

A similar type of gate (with latch) could have been built that opens to the downward side of the stairway. This could have improved safety further by assisting anyone making a quick exit from the tank in an emergency such as a fire or explosion. 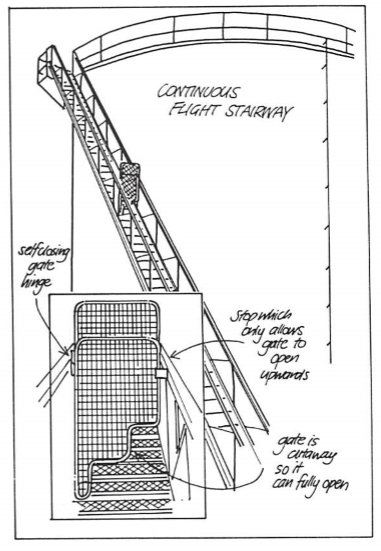